One of my goals for 2019 is to simplify my life by focusing on the things I deem most important. Since my husband has reduced his work week to three days, I am trying to do the same so we can spend more time together. One way I am trying to simplify is by reducing the amount of time I spend on social media, primarily Facebook. I realized the other day that I had perhaps gone a little too far and folks might wonder where I have been!

Here is a quick recap of the last few months: 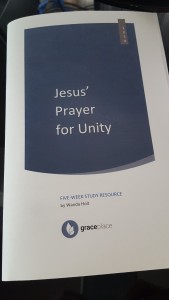 I had a crazy fall.  I accepted a writing assignment from my pastor to do a fall small group study based on Jesus’ prayer for unity found in John 17. The study is a small group study guide with questions and weekly challenges. A great deal of time went into researching the topic and I was quite pleased with where it was going. One day near the finish line, I lost the whole thing in a computer glitch. I did some hasty, fervent prayer and miraculously was able to recover it. (Don’t ask me how!)

The week before Medicare open enrollment and my busy work season began, we took a weekend trip to our daughter’s home where I indulged on honey lavender latte and pumpkin doughnuts. My delicate digestion was not ready for it after almost a year on a low carb diet. After a trip to the ER, multiple appointments with the gastroenterologist and allergist, an abdominal CT, liver fibro scan, genetic testing and allergy blood tests, the experts finally discovered in February what my body was already telling me. No milk. No cheese. No wheat. No gluten. No yeast. And several other things. Don’t feel bad for me. Knowledge is a good thing. My husband and I both cook from scratch so adjusting has not been terrible and I feel 100% better.

Layered over my busy work schedule and feeling bad was a master bathroom remodel. It started in September and was supposed to be finished by Thanksgiving. If you have ever done a remodel, you are not surprised to hear that it was mostly finished by Christmas. It turned out beautifully but we are still waiting on new windows for the bathroom and adjoining bedroom so there are currently no window treatments.

Thanksgiving and Christmas were lovely. We were able to spend quality time with our family, my family and my husband’s family in East Tennessee. Neither of his older brothers were doing well physically but we had a good visit with them. Ten days into the new year we made a quick, nightfall trip to East Tennessee to be with his middle brother who was suddenly at the end of his journey with cancer. When a child of God goes home, it is bittersweet. My brother-in-law’s wife had passed ten months prior, so it was an especially hard time for his family. Two weeks later we returned to East Tennessee for his memorial service. Between those two weeks we took a 2200-mile train trip between Chicago and Seattle that we had previously booked. God knew we needed some alone time experiencing His glorious handiwork to recharge. Stay tuned for an upcoming blog on train folk. 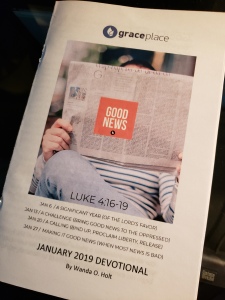 In December, I finished writing a five-week study for our church to use in January. I had procrastinated the writing and had to scramble to finish on time. The study accompanied the sermon series, “Good News,” and is based on Luke 4:16-20. The booklet is suitable for small group or independent study and includes a daily devotional.

If you would like a digital version of UNITY: Jesus Prayer for Unity or Good News!, follow these links to email me. I will also add you to my newsletter list.

One of my other goals for 2019 is to be more focused in my writing so I am not losing files or almost missing deadlines. I am making plans, taking courses and attending conferences to improve my skills and see where God is leading me. He has a plan for my life. He has Good News for me to share. I need to be about His business. In January, I had to buy a new phone and, last week, a new printer. I am ready! New tools, new health and new determination to serve the LORD using the gifts and strength that He has given me!